This year’s Junior Recognition Ceremony on May 24, 2022 was an opportunity to formally acknowledge members of the Class of 2023 for their outstanding commitment and accomplishments in the areas of academics, service to school, and service to the larger community. 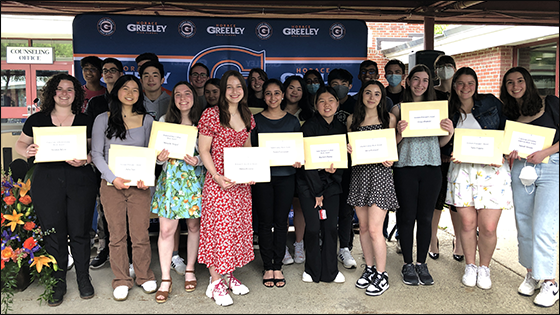 Science
BAUSCH AND LOMB HONORARY SCIENCE AWARD
This junior exhibits outstanding achievement in Science and has a genuine interest in pursuing the sciences in college. This person has earned the respect and admiration of their teachers.
Krissh Bhargava

THE RENSSELAER MEDAL AWARD
This junior is an outstanding academic achiever who teachers love to teach. The recipient always displays a positive attitude toward learning, has been a great resource for classmates and shows great promise in Science.
Siri Reddy

Performing Arts Department Award
NEW YORK STATE SCHOOL MUSIC ASSOCIATION AWARD
Each year, thousands of musicians audition at the NYSSMA Evaluation Festival. The top-scoring musicians are chosen to perform in All-State Band, Orchestra, Chorus and Jazz Ensembles. There is also a competition for student composers, where the winning compositions are honored at the NYSSMA annual conference in Rochester.
Julia Sun

School Service Awards
This award is given to students who have made or are actively making a significant contribution to Horace Greeley High School through school-based service activity/activities.
Martin Kalathil
Elvin Lo
Samuel Tainsky

Assistant Principal's Awards
This award is given by the Junior Class Principal to recognize students who have made important contributions to Greeley and have demonstrated unique personal qualities.
Sara Lippin
Lizzy Osinski
Julia Sun

College Book Awards
The following college book awards are given to juniors in honor of outstanding achievement in some aspect of our school life, and in recognition of each student's potential for future contributions to their school and community.

BRYN MAWR COLLEGE
Recognizes a female student who demonstrates an intense intellectual commitment, a self-directed and purposeful vision of her life, and a desire to make a meaningful contribution to the world.
Tessa Wheeler

DARTMOUTH COLLEGE
To the student who has outstanding academic achievement; be of high moral character; someone who has made a positive impact on the school community and excelled in at least one non-academic area and be considered by the school as a candidate for entrance to a college or university of the highest caliber.
Emily Ni

HARVARD UNIVERSITY
Recognizes a student who displays excellence in scholarship and high character combined with achievement in other fields.
Ethan Kuperman

OBERLIN COLLEGE
The Oberlin College Book Award for Achievement in Social Justice is given to a student in the junior class who has shown commitment to activism and community service.
Alexa Googel

PRINCETON UNIVERSITY
Recognizes a junior who is at the top of the class academically and demonstrates both intellectual leadership and strong character. This student also best exemplifies the spirit behind Princeton's motto, "In the Nation's service, in the service of all nations." The top student who, in addition to academic excellence and integrity, displays a spirit of service in the school community, the larger community, or the world at large.
Hayden Parsons

SAINT ANSELM COLLEGE
Recognizes a junior who demonstrates academic success and exceptional leadership qualities in the area of civic engagement. The student should embody the values inherent in St. Anselm's Benedictine tradition which consists of Community, Hospitality, Service, Moderation, Respect for Others and Humility.
Matthew Carnes

SAINT MICHAEL'S COLLEGE
Recognizes two students who attain mostly As and Bs in honors, AP, IB or dual enrollment classes. They should be students who show a sustained and sincere commitment to community service, issues of peace and justice and concern for others.
Niambh Lee
Rachel Zhang

SMITH COLLEGE
Recognizes a female student who combines academic excellence with participation in extracurricular activities or a commitment to community service -- an educated individual who enthusiastically contributes to society.
Netra Easwaran

TULANE UNIVERSITY
Recognizes a junior who embodies Tulane's motto of "Not for one's self, but for one's own." The junior must also have demonstrated excellence in academics, leadership and public service.
Luke Chang

UNIVERSITY OF PENNSYLVANIA
Recognizes a junior enrolled in a vigorous academic program who demonstrates high personal and academic integrity and who is highly respected by peers and faculty. The student must be a leader in one or more of the following: student government, music, drama, athletics, journalism, and community service.
Jordan Klein

UNIVERSITY OF VIRGINIA
To a well-rounded student rather than a person with the highest GPA who best represents ideals of scholarship, leadership and citizenship.
Sarah Serota

WEST POINT
The 2022 Parents Club of West Point Dwight D. Eisenhower Leadership Award Program recognizes our nation’s outstanding high school juniors who have demonstrated exceptional performance in academics, athletics, community service, leadership, and moral character. Recipient should exhibit attributes of good citizenship including duty, integrity, respect for authority and commitment to the community and nation. This student should be  held in the highest esteem by both the student body and the faculty.
Patrick Fang

WILLIAMS COLLEGE
Recognizes a junior who has demonstrated intellectual leadership and has made a significant contribution to the extracurricular life of the school.
Maria Zvereva